What with coursework, revision and the glorious Christmas holidays it has been almost two months since I last posted and for once I am spoilt for choice with topics to write about. So, as I did my only exam this morning I now have a whole week ahead of doing not very much at all and I intend to fill the week mostly with blogging and once again part of my New Year's resolution is to blog more regularly, we'll see how that goes. Now the question is which idea to start with? Naturally with it just being Christmas, I, like most people, spent a great deal of time in front of the TV so there is no lack of subject matter there. However, I want to start with my most recent cinema visit which was to see Sherlock Holmes: A Game of Shadows. 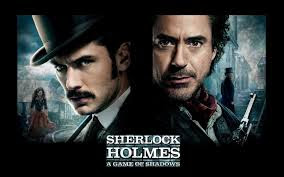 Many 'Holmes purists' would say that the Guy Richie adaptations of the legendary stories are nothing more than over the top action films which have been created to get bums on seats. And to some extent this could be true. There are big names, lots of action scenes, laughs and of course the obligatory glimpse of Robert Downey Junior's torso, all of which are naturally crowd pleasers and of course this is what they do. It is this the combination of factors, the whole package of the films which I think is the reason for their success.

The second film in the series, A Game of Shadows adds a new collection of names to the cast. Noomi Repace adds a more exotic element as the mysterious traveller Madame Simza but the two main new additions are the two Ms, Sherlock nemesis Professor James Moriarty played by Jared Harris and his brother Mycroft played by Stephen Fry. I loved both of them and although there has been much discussion as to whether Fry's performance as Mycroft added too much of a camp element to the film I thought that the nickname given to Sherlock, Shirley and the scene in which Stephen Fry appeared completely naked were amongst the funniest moments of the film.

Most of the humour of course came from the man himself, Robert Downey Junior. Not only with his constant wit, just as Holmes should be, but the scene in which he disguised himself as a woman was very funny, although not by far his best disguise! In my opinion Robert Downey Junior is a very could Sherlock and the relationship between him and his Watson, Jude Law does work well. Despite my fairly low opinion of Jude Law I can actually just about get through his performances as Watson without wanting to punch him in the face. (although his recent appearance on The Graham Norton show in a beanie hat soon rectified this!)

Now a very different Sherlock and one which seems to be receiving a lot more praise than the film is the BBC recreation and I too can say that I prefer it a great deal. I absolutely love Benedict Cumberbatch's Sherlock and also Martin Freeman's Watson. The latest episode, The Hounds of Baskerville was a very interesting take on the classic story. With Baskerville taking the shape of a highly secret animal testing centre hidden on the moor which created a drug, the 'Hound' which caused terrifying and life like hallucinations. It co-starred a confused and scared Russell Tovy and was as ever both witty and extremely entertaining.
Posted by Rachael at 4:19 pm