Well it really has been a long time since I last posted. The last few weeks of my life have been, to say the least, mental. I have a tonne of films to discuss, but before I do I will give you a quick update of what has been going on in my life! Since the last time I posted I have completed all of my A-levels, officially finished college and, most importantly, turned eighteen! Unfortunately, however I have not been able to enjoy the privileges that come with being an adult because I have been so busy with exams, but as I now have a whole summer ahead of me, I will be enjoying them asap! I have also booked a holiday away with my friends to Portugal which I'm so excited for and as of next week I will have Big Chill to look forward to too and despite many negative comments about a too commercial line up, which I can see, who wouldn't jump at the chance to see Kanye West live? 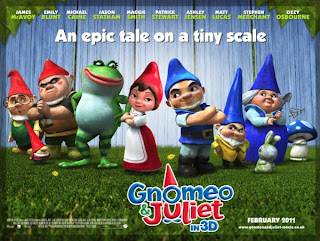 I'm not entirely sure where to begin with films. It feels like I've watched hundreds over the last weeks as my revision has regularly deteriorated into just watching one so my life has been dotted with films. Firstly, for my birthday my friends bought me Gnomeo and Juliet, which I have wanted to see since I first saw the trailer. I wasn't disappointed! It was funny, cute and a sweet film in general. With the talents of many of the country's best actors it was hard to hear any unrecognisable voices. From the two main characters, James McAvoy and Emily Blunt to hilarious performances from Ashley Jensen, Matt Lucas, Stephen Merchant and particularly Ozzy Osbourne. The soundtrack was also excellent, naturally, it being by Elton John, with a new song featuring Lady Gaga which I love. I would definitely recommend it and it certainly goes in the collection of children's films that adults love just as much.
Also, I recently watched another film starring Emily Blunt, Wild Target, with Bill Nighy, Rupert Grint, Martin Freeman and Rupert Everett. Its about an assassin who falls in love with his target. It was okay, not anything special but watchable and funny in places. What I also liked about it was it didn't try to be anything that it wasn't and generally was average yet enjoyable. 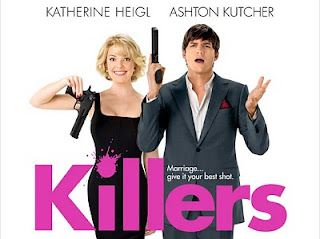 Killers, however was a film I found to be the exact opposite. It fitted the classic awful Hollywood rom com role completely and relied far to heavy on the main character's attractiveness rather than the plot or in fact the acting. Katherine Heigl and Aston Kutcher although never exceptional in the acting ability usually are relatively self aware but in this they seemed to take it with the same seriousness as someone performing at the globe. The plot just became ever more ridiculous as the film went on and tried to be similar to films such as Mr and Mrs Smith (which I also re-watched and it is still excellent) and couldn't compare. Aside from a mildly amusing appearance from Alex Borstein there was little in this film which I liked.
At the moment, although I am planning to watch Glastonbury for most of the weekend, the next couple of films I will be watching are Letters to Juliet and Salt because they are the ones on Sky Anytime at the moment. Watch this space for those and maybe some more too as I can blog much more now due to the fact I have nothing to do until September.
Posted by Rachael at 10:01 pm No comments: