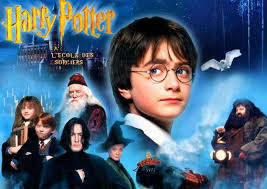 This week across the world we are all witnessing cinematic history. Described as an end of an era, with the premiere last week, the final film of JK Rowling's phenomenon opens this Friday and as part of the generation who have grown up with her novels and with Harry Potter playing a huge part in their lives, I thought now was as good a time as any to address the world which has been present throughout my childhood.
Emma Watson is quoted saying that she can't remember much of her life without Harry Potter and this is something I can definitely relate to. I have read all the books countless times, seen all the films even more times and for a large part of my life hoarded everything to do with Harry and his world. I took every chance to clutter my room with posters, magazine specials and all things Potter. I even still have a pull-out from the Times magazine special of the first film (I also of course still have the magazine) which is an advert for something in the shape of the Hogwarts letter Harry receive 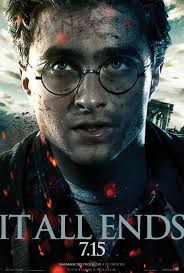 s in the first novel complete with his cupboard under the stairs address and it even opens! I am sure that I also have all if not most of the cinema tickets from every film. But of course it started with the books, I am that child who queued at midnight for the release of the new books and on twice I even won prizes, a mug and a glow in the dark muggle T-shirt, both of which I obviously still have! I've not only played countless games revolving around this world, I've had Harry Potter parties and I even wrote my own Harry Potter play, which my friends and I performed in one of our Primary School assemblies, in which I played the Boy Who Lived himself, complete with glasses, a lipstick scar and hair in a bun!


So what is it about the books that makes them so popular? The world Rowling creates is almost Tolkien in its detail, although not quite so boring in their description. Her novels are overflowing with countless exciting, interesting, weird and wonderful characters all of which are extremely memorable. The world itself is also so important in Rowling's novels, the incredible locations and situations are mind blowing to a young child and the magic is what shapes this amazing world. It is a world that you want to be a part of and the characters are people you want to meet and be friends with. This is yet another reason for the books popularity, the friendships. Harry, Ron and Hermione are the perfect protagonists for all children none of them are the classic popular pretty kid, although each of them are perfect in every way for their readers (and nowadays there is no denying that Emma Watson is incredibly beautiful!) The growth of these characters and the relationships between them is what makes the novels so special and essentially, despite the magic and adventure, it is what the novels are centered around, childhood friendship and growing up. 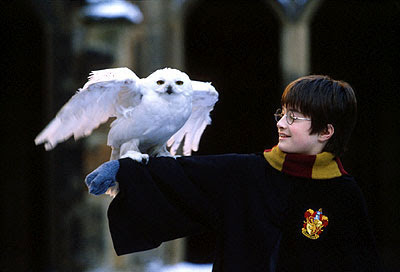 Being about the same age as the three main characters when the first film came out (well at least the age they are supposed to be) I have grown up with them. I am truly part of the Harry Potter generation and it is something that we share, we can discuss it, its our generation's common ground. Now, having just turned eighteen, as the characters will in the final part of the Deathly Hallows, the end of an era has truly come and it is, despite this sounding pathetic, sad. Arguably the biggest part of my childhood is soon to be over, I will never again feel that same excitement of the next Harry Potter book or film coming out. Never again I fear will I feel the need to devour a book so quickly yet at the same time savour every page. As I myself now have to grow up, leaving my school which I have attended for seven years, move out of the house I have lived in for eleven years and move into the real world by starting university in a new city all on my own, I also feel like with the closing of this incredible story I will be officially letting go of my childhood. Although with the release of the new Pottermore website, the total relinquishing may have to wait a while!
Posted by Rachael at 4:34 pm No comments:

Yesterday I went to see X-Men First Class and it was amazing! I spent the day before re-watching all the films and forgot how good they are, even though they're not exactly cinematic masterpieces! The film is a prequel to the X-Men series and tells the story of how they formed and it was actually one of the best films I've seen in a while.


Despite a terrible script in places and some dodgy accents, I genuinely enjoyed the storyline and at a healthy 132 minutes there were no places were I felt it dragged. There was a good balance between action and actually interesting parts of the story, something which is often missed in big budget action films such as this. The characters themselves were well played and had depth too something else which is often absent from this genre of film. James McAvoy as a young Charles Xavier and Micheal Fassbender as Erik Lehnscherr (Magneto) appeared together for the first time since the both starred in Band of Brothers at the start of their careers and they worked very well together. Both gave what were, in my opinion, very good performances and their on screen chemistry was also very believable. The appearance of some familiar faces of the mutant variety were also mostly good. I especially liked Nicholas Hoult's Beast and equally enjoyed the familiar faces of Emma Frost and Raven/Mystique and a thirty second cameo from one Hugh Jackman (Logan/Wolverine) was really funny!

Also the scenes at Charles' mansion where the mutants were learning to control their powers were very funny. With Havok, Banshee and Beast as the ringleaders of the comedy throughout the film this section showed it at its peak.
There were places however, which I found occasionally almost excruciatingly cringey such as the whole setting of the Cold War and clips of JFK addressing the world which didn't quite look right. Also there were some terrible moments of dialogue such as jokes about Professor X losing his hair and the mutants always being ... X-Men. But then these films have never been known for their outstanding writing with gems like "What happens to a toad when it gets struck by lightning? ... The same thing that happens to everything else!" so lines like these can be, in my opinion, forgiven and forgotten.
Generally though it was very enjoyable and possibly the best superhero movie I have seen in a while. It certainly seems a lot more polished and just much better overall than the Ryan Reynolds' new film The Green Lantern. However, I can't wait for the new Captain America film The First Avenger which looks really good!
Posted by Rachael at 5:36 pm No comments: