Well it has been a long time since I've written anything as I've sort of fallen out of habit for various reasons. Firstly, there was the French exchange which seemed to last well over a week and took up nearly all of my time! Then I've been overloaded with work the last couple of weeks at college and I had a French exam too yesterday. But also all of my friends 18ths have seemed to come round really quickly and so I've been out pretty much every weekend too!! I also haven't had an awful lot to talk about either in terms of film then three films have all come at once but I want to focus solely on the best one which is possibly one of the best films I've seen for ages!!

Despite the French exchange being a bit of a waste of a week we went to watch Never Let Me Go the film based on the novel by Kazou Ishiguro. It tells the story of three children Tommy, Kathy and Ruth, who grow up in a boarding school for children who are created to become organ donors. It follows the journey of the three and how their relationships change and how their love for each other alters over time as they deal with this process and come to terms with their inevitable fate.
Andrew Garfield and Carey Mulligan were amazing and I thought they played their parts really well. There was also a very good albeit small performance from Domhnall Gleeson and a variety of others including Sally Hawkins. Unfortunately I found Keira Knightley to be her usual slightly irritating self but luckily it wasn't so unbearable that it distracted me from the film itself. The look of the film was also really good. I loved all the sets especially Hailsham and the cottages and the costumes were very well chosen and I thought showed the different eras and progression of time very effectively too.

Generally it was just a really sweet, nice film but it did unfortunately and rather embarrassingly make me cry a lot (much to the amusement of our French exchange partners who were not as involved in the film as we were!). I would definitely recommend it and it is worth watching!

One of the other films I watched recently, one which was equally cute, was L’arnacoeur/Heartbreaker with Romain Duris and Vanessa Paradis. It was quite a soppy, girly film but it was good and quite funny in places. I especially enjoyed the scene where Romain Duris did Johnny’s dance from Dirty Dancing! The ending was also obvious as it was a typical two who shouldn’t get together do kind of story but I enjoyed it and was very surprised that I understood nearly all of the French without subtitles!

I am from now on going to attempt to post more frequently even though I am pretty sure it won’t last long. I’ll have to keep on top of my film watching too so that I have something to talk about too!
Posted by Rachael at 8:25 pm No comments: 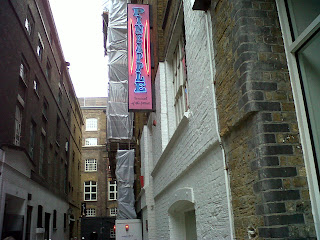 On Thursday I went on an amazing trip to see Billy Elliot The Musical in London. It was incredible! We started the day with a dance class at the legendary Pineapple Dance Studios with one of the cast members of the musical. We learnt the finale of the show and despite my having not danced for about five years I was impressed that I was actually able to do it! It was amazing and although to my disappointment we didn’t see Louis Spence, just being inside the Studios was fantastic. It was a lot smaller than I thought it would be and so busy. There was an audition going on and so there were people everywhere but I absolutely loved it.

After a quick look round Covent Garden and a stop at Pizza Hut for lunch we headed to the Victoria Palace Theatre to see Billy Elliot. It really was amazing, jaw droppingly so, I loved it so much and it is definitely, without a shadow of a doubt the best musical I have ever seen. The show itself was mind blowing! The choreography was brilliant as were the songs and whole structure of it. The film was really done justice and translated really well onto the stage. The Billy we saw, Scott McKenzie, was incredible. He excelled Jamie Bell in terms of dancing and his singing and acting was amazing too. I especially loved the scene Billy is really angry and just dances, in the film it’s to the song Town Called Malice by The Jam, but on stage it was just so much more intense, it was incredible! 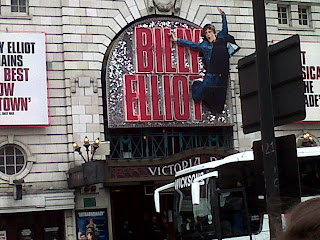 Also, just like the film there was a great balance between the themes and emotions. There were very funny moments, with Billy grandma’s song We’d Go Dancing and Merry Christmas Maggie Thatcher. However, the star of the show with regards to comedy was the character of Michael. His song with Billy, Expressing Yourself was hilarious but again also showed just how talented the kids were with their incredible tap dancing! Also, the more intense moments were very well done. The relationship between Billy’s brother, Tony and dad, Jackie (played by Martin Marquez/ Gino from Hotel Babylon!) was very emotional as was everything to do with the miner’s strikes in general and when Jackie collapsed onto the floor into Tony’s arms I couldn’t stop crying. Even the song Electricity, when Billy is explaining why he loves dance so much, had me almost started to blub. But, by far the most emotional part which had me and, I would say, just about everyone else in the theatre, in floods of tears were the songs Dear Billy (Mam’s letter) and Dear Billy (Billy’s reply) both were beautiful songs and really showed Billy’s reaction to losing his mother when he was so young very well. Although, for some reason I think cried more at the film but I think this is mainly because of Julie Walters’ amazing acting!
I also would have liked it to have ended in the same way as the film with Jackie and Tony going to watch Billy dance in Swan Lake when he’s older and to have seen him dance then but I did love the dream dance between Billy and his older self. Although, the Swan Lake music gave me flashbacks to Black Swan, the dance was amazing and beautifully performed.
In general, as I am sure you can tell, I loved everything about it. I would most definitely recommend that everyone goes to see Billy Elliot The Musical if they have the chance and also votes for them for the Olivier Award because they certainly deserve it!
Posted by Rachael at 3:11 pm 1 comment:

It is hard to know where to begin with regards to this year’s Academy Awards but I’ll give it a go by starting with the start!

The hosts. James Franco and Anne Hathaway. To be honest they started well with a fairly funny, very well put together homage to the year’s films just with themselves photo shopped into them. This reasonably good start was not kept up and what followed were four hours of stilted conversation, obvious lack of chemistry, bad jokes and over staging which was attempted to be rectified by the impressive use of technology for sketches. Although, I was very impressed with Anne Hathaway’s beautiful singing voice this was detracted from with James Franco in drag which was just another unfunny and unnecessary addition! 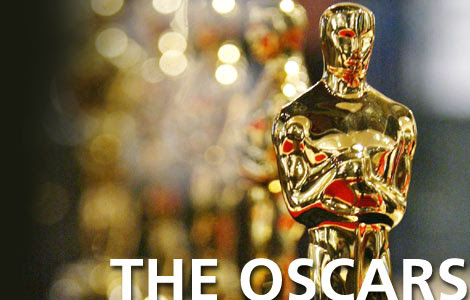 The look of the ceremony itself however was faultless. The Swarvoski crystal encrusted stage was beautiful as were most of the dresses which stood on it. I also loved the background screens and all the effects used were very impressive.
Anyway to the awards themselves. Overall I was very happy with the way they were distributed there was no clean sweep for one film and I felt that there were few films which missed out on recognition they deserved. I was so happy that the King’s Speech walked away with so many awards and very glad it won best film. Also, I am over joyed that Colin Firth has finally got an Oscar which he definitely deserves.
Other winners included the brilliant Natalie Portman for her unsettling role in Black Swan and Social Network also took away several well deserved awards as did Toy Story 3. The Fighter also received a substantial amount of acclamation but I can’t really pass judgement as I am yet to see it.
Generally, I thought it was a very good ceremony and I really enjoyed the commentary programme with Alex Zane, Brix Smith Start and Edith Bowman too.

On another note, this week a twitter craze has swept college and I have now become addicted. You can find and follow me here http://twitter.com/#!/RachaelJoTurner!! Also, at the moment I am beyond exciting for a trip tomorrow to London on which I am not only going to see the amazing Billy Elliot but get to take part in a dance class at Pineapple Dance Studios with the cast too! Now although this could lead to a lot of embarrassment due to the fact I cannot dance to save my life I am so excited it is ridiculous!
Posted by Rachael at 10:13 pm No comments: